12 groups that hate the internet

[i]Every year, Privacy International shows the countries that think 1984 was an instruction manual rather than a novel. 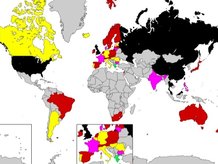 Countries in black are the worst – and we’re one of them.[/i]

High street shops
In 2005, the boss of HMV dismissed the internet as an irrelevance. In 2006, he resigned after competition from cheap online shops and download services wiped out HMV’s profits. Now, the world’s biggest music retailer isn’t HMV, or any high street chain, it’s Apple.

The internet hasn’t just ruined music retailing. Online shopping and price checking services have forced all kinds of retailers to slash their profit margins just to stay in business – and many of them still didn’t make it. Things will only get worse for the high street as the internet moves to our mobiles and tells us when there’s a better deal next door.

Hollywood studios
Before the internet, studios could release any old bobbins and make a fortune. Now, spies in focus groups and leaks from insiders can kill the buzz on a movie before it’s even finished, and file sharers are trading blockbusters on the day of release. The studios’ attitude to the internet is like Robert De Niro’s attitude to Ben Stiller in Meet the Parents: gritted-teeth acceptance rather than joyous love.

The Church of Scientology
The famously litigious not-a-cult-honest-guv spends a lot of time chasing internet leaks and online criticism. We’d say more, but as we discovered a few months back, they know where we live. Eek!

Pop stars
Prince sues fans for uploading their own images, Elton John wants the internet shut down for a few years because it’s destroying good music and Roger Daltrey feels “about as useful as a pork chop in a synagogue with all this internet bollocks… go out. Get a life”. We’ll just gently point out that all three internet-hating gentlemen are, ahem, somewhat past their sell-by dates.

The RIAA
To paraphrase The Sixth Sense: “I sue dead people!” And grannies!

Tabloid newspapers
Maybe it’s because the internet is killing the classified ads that keep their local papers in business, or maybe it’s just that their readers fear anything that’s happened since 1956. Either way, the result is that a number of newspapers go out of their way to find negative things to say about the internet and never let the facts get in the way of a good story.

Metallica
Although technically pop stars, the ageing metal millionaires deserve a category to themselves: as if attempting to nobble Napster and inadvertently making file sharing even more popular wasn’t enough, they’re still whingeing about the internet – this time, because it lets fans listen to their new album and tell one another that it sounds rotten.

ISPs
Internet service providers and phone companies have a love-hate relationship with the internet: on the one hand they’d like us to use the internet, but on the other they’d prefer us not to use it too much – because if we do, they’ll have to spend a fortune on upgrading their networks and bandwidth capacity. Hence bandwidth caps, insane mobile access charges, ‘fair use’ policies and the whole net neutrality debate.

The Iranian government
According to Reporters Without Borders, the Iranian president Mahmoud Ahmadinejad “is so little able to bear criticism that even an ironic article about his bodyguards’ dogs earned one blogger, Reza Validazeh, two weeks in jail in December 2007”. High-speed connections have been banned since 2006, most external content is censored and websites have to be registered with the government.

The Chinese government
When it comes to hating the internet, the Chinese government are the experts: not only do they crack down on free speech and prevent people from seeing anything they don’t approve of, but they’ve persuaded Western giants such as Google and Yahoo! to go along with them. Reporters Without Borders routinely highlights China in its annual Internet Enemies list, and notes that “The country is already the world’s largest prison for cyber-dissidents.”

The UK government
We’re not as bad as China or Iran, but our government is still rather keen on using the internet to keep tabs on the entire population. In Privacy International’s list of surveillance societies, the UK is in the same ‘black’ category as those other bastions of freedom, Russia, China, Iran and Singapore.