Found out the Blue Angels (US Navy display team) had made an emergency landing at a nearby airbase so raced out of college today to get some pics.

Nothing technical about these pics, I was far too excited to set the camera up and my hand was shaking! They don’t come into the coutry very often and I have wanted to see them since I was a kid. They have my favourite aeroplane of all time with them - the C130 Hercules (the big one at the bottom). 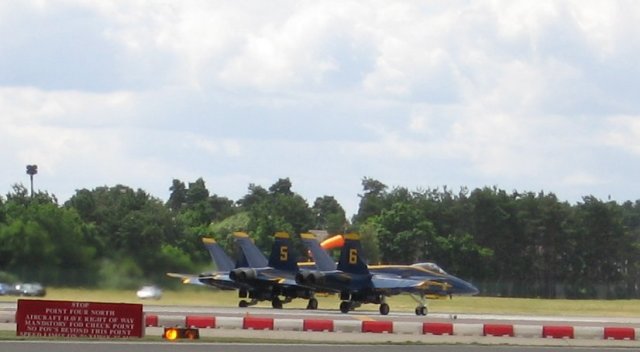 Lucky you! I live in America and I’ve never seen them live, even just sitting on the runway.

I’ve seen the Red Arrows, the Swiss, French and Italian teams. Would have been nice to see a display from the Angels but obviously they weren’t here for that. The Herc apparently does a jet assisted take off - but it didn’t today

oooh very nice,
its spur of the moment snap shots like that i like :D,
would have been nice to have had a video camera tho,
but maybe thats just me i do love planes :D,
the blue angels fly the FA/18 do they not?
very nice bit of kit

How did you hear iabout it I want to know?

You should be hard at work at college, not listening to military frequencies

Does the Herc take part in the display’s or is it just a support role?

I want to see the Sukoi’s (or is it the Mig?) in action…espcailly with that amazing fin thing they can do. No western plane can do it yet as well…

The mig29 i belive is the only military aircraft that can go directly up, then cut engines,
start to dive and recover engine power and go back to flying properly :),
migs are definatly good air craft and only a handfull of western planes can match its capabilities

Thats the manauver I was on about

But the pics are great bet your well chuffed with that

Pics will be back soon

Yes they are F18s, and I believe the Herc displays with them.

I found out about them yesterday when I saw a white Herc fly over work. I am a member of a Yahoo newsgroup which has info about mildenhall and Lakenheath - the 2 local USAF bases. I found out they were staying overnight so finished my exam in super quick time and raced over to Lakenheath

So I was good really

One of my favourite display teams were the Russian Test Pilots in the Sukhoi SU 27s. They flung them around the sky like paper aeroplanes. mmm.

Lakenheath is greate, as you drive past all you get is f15-e’s flying over, blooming distracting when your driving. Wehn the sr-71 used to fly from mildenhall my nan and grandad and mum said it was :cussing: loud

*Goes to see about booking tickets for RIAT

I have seen them in action at the air show at Ontario Place a few years back. Nice pics!

Some brilliant stuff :D,
i would really love to go up in a jet one day and do somthing like that

I have come Across a photo taken in 1972 of the Blue Angels F-4J Phantom II lined up on airstrip. I was wondering where I would go to see how much its worth? If anyone could e-mail me or post the info that would be wonderful.

Ooohhh, the power of google !

Thats almost as old as this thead Nina