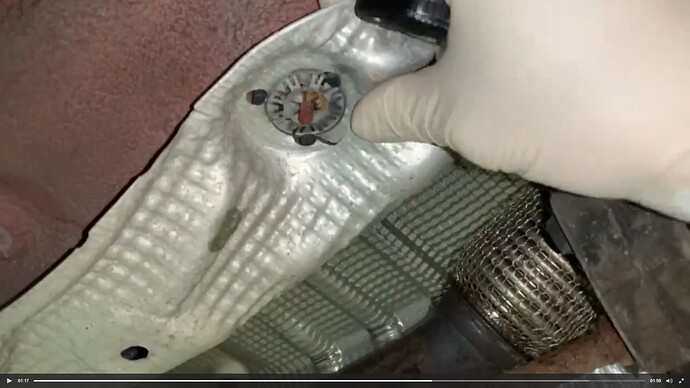 heatshield1920×1080 254 KB
Car in routine service, garage pointing out this as something to look at. Exhaust heat shield mount failing at this point. Doesn’t look that bad to me? They want £128 to fix. Told them to do nothing for now.

I’ve also been declining their recommendation of a cambelt replacement for some years. It is now £669.

I had similar with my old Alfa 147, I just put on a a few rubber washers ans glued kept very thing in place fine

but in my defence they kept reducing the interval change period so must have been an known issue but in my case just too late for me.

Applied a work around fix to a friends car last week, the heatshield had started cracking around the mounts.

I used a hole saw to make a custom washer big enough to bridge across the cracks and refitted the clip over the lot.
It no longer rattles

Worth a patch up then? As far as I’m aware it isn’t making any noise and only one of many the mounts have degraded.

Car is getting to the age where I start thinking about replacing anyway. Might be worth 3k private sale, so cam belt replacement is a huge proportion of that, and if it did fail might be a write off.

Last time I googled around the cambelt apparently only VW UK recommend routine replacement, other countries just say monitor it beyond some age. Not that I do that since I have no clue what to look for.

I looked at the picture of your heatshield and upon reflection, is that brown underseal or a sea of rusty floor pan ?

I have owned ONE Austin Allegro which looked very similar in the places the engine hadn’t sprayed the underside with oil.

A final question, is your VW/Seat? one with three cylinders ?
If its three cylinder they seem to be very difficult to fix.
There was a bloke on Autoshite battling with a VW fox or Lupo with the 3cyl for some time before it went off to the bean tin pile as the engine was although running, very very poorly.

Will separately message you to the video for wider context. It doesn’t look brown to me, more a kinda purple-ish? Now that you mention it the surface of the exhaust has something closer to rust.

It is a 1L 3 cylinder thing. I’m unlikely to fix anything myself unless it is trivial, like the battery swap. If the engine starts failing and is not an easy fix, time to replace car. On average I keep cars around 8 years from when I get them and this one is in that window. Again, no major faults so I don’t have a plan to replace right now.

I would absolutely not worry about it at all, the other fixings all looked ok and I would expect it to go another eight years.

My Mother in law has an 18 year old Seat Ibiza that just plods about with 100,000 miles on it, every thing works apart from the keyfob remote and nothing has fallen off.
If you hang on a year or two more there could be a scrappage scheme to get an EV and just trade it in.

Having looked at AutoTrader, these are cars that hold their value!!11!1!

Despite being eight years old it is still worth more than the combined value of the last FIVE cars I bought.

Just drive the thing chap, or sell it to me for a Bag-o-sand if you want rid !