So, bearing in mind the kit we all run for Science it does seem a little strange we don’t have much of a thread based on the mining of Crypto Currencies.

So many people have jumped onto the bandwagon, a lot of them new people unsure of efficient clock speeds or power usage and we have years of knowledge on that sort of thing between us.

From the simple programs such as NiceHash to running a dedicated algorithm compiled from source on GitHub to mine your coins - there must be some knowledge here that is worth tapping into and I wonder if we can get a few of the dedicated miners to spend a few days a month doing Science work.

I have a couple of webserver VPS machines that have Monero running on the CPU, a dedicated Ethereum using a RX480 and my gaming machine and work machines all have 1070 8Gb cards, mainly on Ethereum. I’m taking a punt on LUXCoin as my alt-coin gamble, I think everyone should have a gamble at the next “big” coin.

Bit of a strange time to start the thread, bearing in mind the current prices! Last time they dipped this low, hardware started to appear for sale at “normal” prices and not hyper inflated mining prices, so could be good for the science crunchers.

Share your thoughts, knowledge and setup - time to attract the search engines back to TPR.

I will state that I don’t trust it and probably will not mine any myself. It just feels wrong somehow and with the ridiculous fluctuations in prices it looks like it will be a while before it gets to any semblance of being worth a real punt. That coupled with the horror stories of the millions hacked out of the various “exchanges” I don’t think it’s quite there yet. Needs more control and regulation by an already trusted body (SEC, FSA, FCA or similar) and not left up to the individual exchanges themselves. Just my two pence worth. Also it means I’ll soon be able to get a better GPU at a not-inflated price soon

I’ve not cashed out anything I’ve mined yet, but using a decent holding account is tricky without a lot of research.

Sent from my BLA-L09 using Tapatalk

I’m playing with this. Its kind of turned into a hobby that has taken me up from where crunching started me off.

Using guides and forums i’ve managed to get a rig running with 6 cards on on a win10 system (which really isn’t a bad option at all) hashing at a rate of 3.5k on a mix of RX570/560/550 cards and i’m currently restricted by pci slots in board although looking at risers that have multi ports on them to take things further. Started off with it all propped up on a shelve but now got it all in a frame and plugged in at work :chuckle:

Quite like the tinkering with it aspect and deciding what it should do as well as what to do with the coins, sell, hold, trade. Its all good fun.

Currently mining Masari in a pool, fighting against asic miners that have upped the difficulty but waiting for a fork which should stop them all and bring it back down, those who held the coins when they were easy are quids in right now as the price has risen due to difficulty.

Anyway, all good fun. Must resist being a dirty miner buying up more graphics cards but those RX550’s are great value :smackbum:

sounds funky Peige - pics required though, perhaps of the evolution of the rig as well as the “hobby” got you by the short and curlies!

Prices have dipped low enough now that I’ve had the home machine off for most of this week, not that it’s “saving” me anything as there are now both of the boys home for a few weeks.

Work machine is now going for a little while with the twin 470’s on Luxcoin using the Unimining pool. I’ve been in a few coins discord servers and these seem active and responsive to queries and the coin is in early stage. It’s a massive punt to guess the next big thing, but this is my guess so fingers crossed. CPU is now on Rosetta, so back on BOINC for a while.

The little J1800 celeron ubuntu box with the RX480 is still on Eth though.

Have a setup with 5 x RX570’s running ETH. Only been running since January, total hash rate at the moment of 134MH/s I know I could spend some time and boost it slightly but the heat was unbearable and the power usage jumps a little too high.

Currently using https://simplemining.net/ which works really well and the fee is only $2 a month which just stops the worry of Windows updates etc.

I am about 3 payouts from the pool away from having 1ETH coin and will probably be switching to something like Zcash. I do have some other Crypto but that was mined using minergate and its just sitting there now waiting until its worth cashing it out.

As far as myself and the friends involved are concerned its just a little punt at making some extra cash. If by luck the currency we have shoots up in value then thats happy days

if not then so what. The initial investment is gone and hopefully we get to a stage where it will pay us back 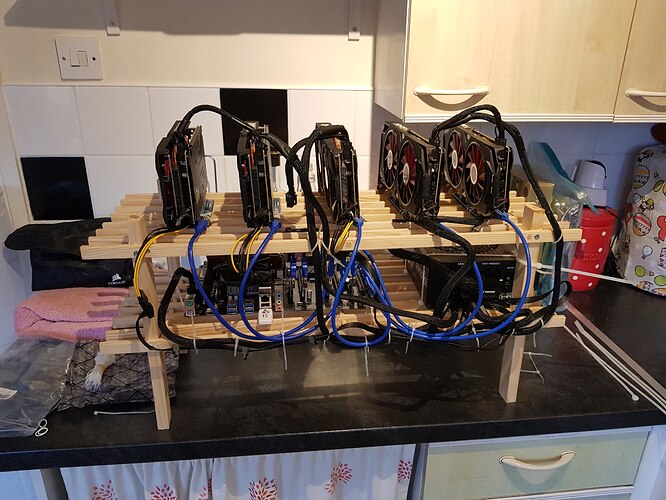 Above is the image of our mining rig. The frame is a £4.99 shoe rack from Argos as it just seemed like an easier and cheaper alternative to what was available online. Also the price of wood involved would have exceeded the £4.99 cost from Argos

For the record its a lot tidier than it looks in the photo!!!

I’m normally a big advocate of keeping things simple, but that hash rate for that setup doesn’t sound right. I’d be looking for 150 total although I know that may require custom bios on AMD cards.

Getting it stable at anything over 134 became such a hassle it barely seemed worth it. They are currently running anorak power saving bios which helped reduce the energy costs.

The temptation is increasing to buy another card to add to the rig with the prices dropping. The board can handle another 2 or 3 cards.

I’ll look in to increasing the hashrate again. But for the XFX RX570 I’m sure I read that people usually average around 27 MHz per card. Which isn’t much off our pace.