In days of Yore there were things like the Shuttle-X tiny PC’s that could muster fair bit of CPU in a SFF box.
I have been using a Zotac with an Intel Atom dual core as a desktop for a couple of years, maxed at 4Gb of memory and chugging along with Ubuntu desktop.
Boringly reliable, drives a nice big screen over HDMI but is now lagging behind somewhat.
My biggest gripe is it cannot run a live view from my CCTV cameras without flailing the CPU to death.

The next wave of Zotac hardware is on the comedy side of a bag-o-sand so I’m looking for something else that will drive two screens, support at least 16Gb memory and a reasonable turn of speed for CPU stuff whilst being small and festooned with I/O for USB, hdmi, Display port adaptors and maybe two gigabit ports. 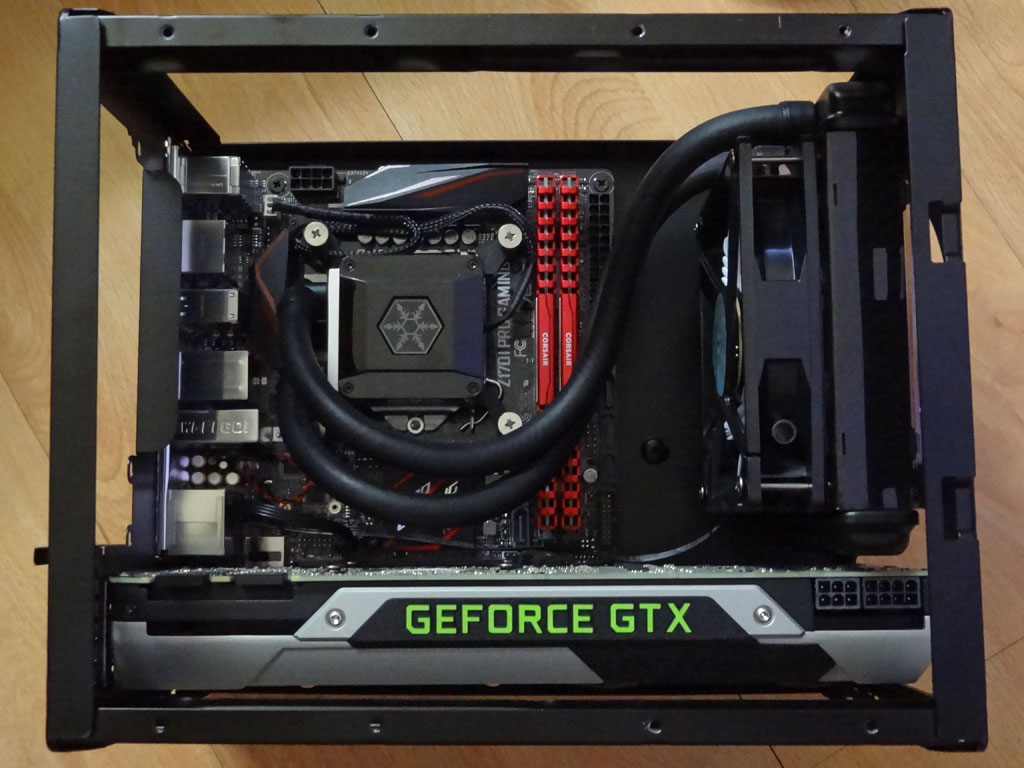 Depends on size and budget. For starters, have a look at the Silverstone SG13 case. Image is an old photo of a build in progress for a taste of the insides. You can go Intel or AMD, pick a lower power CPU, enough room for a 120mm AIO cooler although air is possible too. This is quite comparable to the old Shuttle boxes and you can pick whatever spec you need. Note on the case, it comes in mesh and hard front versions. Get the mesh one if you want any airflow at all in the case to help keep things cool. Not shown in pic is a regular size ATX PSU fits in there so no need for premium smaller ones.

If you want to go smaller than that, have a look at NUCs. Upgrade options are more limited there but 16GB of ram should be possible.

It was originally built as my VR system. Of course, doesn’t stop me from wanting to tinker with it. 6700k ran too noisy in it. Slowed fans, then too hot. Replace it with 6600k, still hot but concerned about longer term performance. Got a 6700T to fit at some point, will ditch the water cooling and put in air cooler.

Some time I might actually use it for something, like firing up Beat Saber for a 3rd session ever (if updates to the game haven’t broken mods again).