few weeks back had a play just to see what Windows 11 was all about, spotted a Project for getting it running on A raspberry Pi 4.

savin grace : Will Bluetooth to Phone

Pitfall : Slow as $%^ running off a Thumbdrive instead of an SSD but run it did.
Savin grace : No TPM stuff

Interesting observation: Only using 0.9Gb memory out of the 2 GB My Raspberry Pi4 has

Things seemed snappy enough until it needed to do anything with the Thumbdrive but played the inbuilt card game surfed some internet (sooo sooo slow) again thumbdrive.

managed to install some other software too but that was a bit much for the 4 core’s of the PI4 as it not running Pi software the fan could not spin thus not able to cranking it up to 2Ghz and it was throttling from over heat @ 1.5Ghz

Shows Windows can use a small foot print and could be an alternate to a chromebook os.

Curious, does it also run x86 code? Put aside performance for now, it working at all is the more interesting part.

I though the TPM hardware was a mandatory requirement for Win-11 ?

There is a Pi-4 here “somewhere”

Probably will be in the end but the preview I think is more relaxed.
probably would not recommend running on a Pi4 lol but it did with a few issue given no real wifi drivers yet so hard wired or bluetooth.

@mackrel yes runs x86 - i also installed my SDR radio software on there admittedly maxed it out under the conditions but it ran but then the version I use is older and I know there is a dot net 5 version that would probably suit it better.

Need to see where that project goes, but it shows Windows 11 on a Pi4 is viable 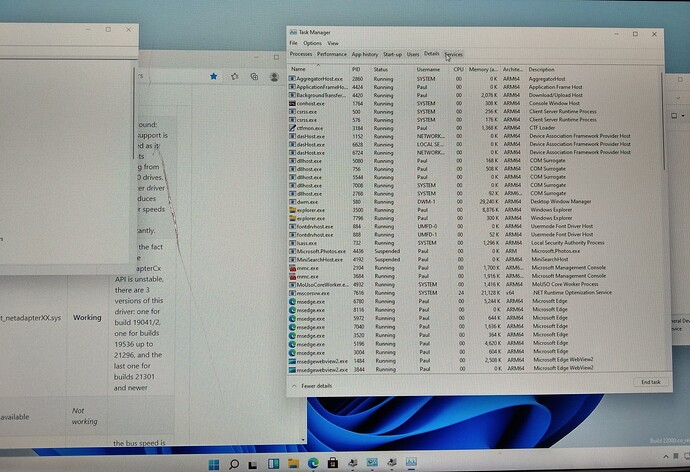 It appears if you install fresh you can get past the hardware requirements or thats what am reading, if you come to upgrade a already running system that they kick in (which makes no bloody sense)

And yes PMM; why is it that a desktop image install uses so much bloody ram yet put it on a smaller rig and it seems to resize itself to use less then a gig; the last time i saw this was back in Windows XP days

That would be my understanding also

, I think this is geared towards PC manufactures and upgraders of existing win10 machine but if you go it alone you can have without. however it does seem some games makers are now using TPM and Secure boot as requirements to run the games.